The Lady Eagles brought home the volleyball win in two sets, winning 25-13 and 25-21. Natalie Burns had 17 serves with 12 aces, while Arlington Weido had 11 serves with 5 aces. Natalie Burns led the attack game with 24 attacks and 11 kills, while Kaeci Bishop fielded 10 digs.

In basketball action, the MBCS Eagles jumped to an early 30-3 first-quarter lead, with a final winning score of 70-26.

Landon Griffin led scoring efforts with 15 points, followed by Dolton Weido and Jack Bishop with 14 each, and Jag Mullinax bringing in 12. The Eagles went 5-6 from the free-throw line.

Both senior high teams are competing in the Malvern Winter Invitations later this week in Malvern, Arkansas.

MBCS at Home vs Southwest Christian

The Southwest Christian Academy Lions came to El Dorado on Tuesday night for volleyball and basketball action.
In senior high volleyball action, the Maranatha Eagles fell three sets to none, 11-25, 18-25, and 22-25. In serving Kathryn Reed landed 7 aces on 13 serves, while Natalie Burns landed 5 aces on 13 serves. Natalie Burns had 10 blocks, while Kaeci Bishop racked up 9 kills.
In junior high basketball, the Eagles won 42-26. Andrew Reed, Roman Mullinax, and Jack Bishop each had 12 points, with Reed and Braxton Griffin shooting 100% from the free-throw line.
The senior boys fell to the Eagles 41-76. Dolton Weido and Landon Griffin were the scoring leaders with 27 and 10.
All four Eagles teams are back in action Friday night at home when they host Ambassador Baptist Academy from Malvern.

The Maranatha Eagles swept the Eagles from Jacksonville Christian Academy at home on Friday evening.

In junior high volleyball action, the MBCS Eagles won in two sets, 25-17 and 25-7. Arlington Weido racked up 15 serve attempts with 13 aces, while Kathryn Reed accounted for 4 assists and 7 kills.

In high school volleyball, MBCS won in two sets, 25-12 and 25-19. Natalie Burns and Arlington Weido each had 14 serve attempts with Burns landing 8 aces, while Weido landed 5. Kathryn Reed led the team in assists with 9, followed by Burns with 8. Kaeci Bishop had 9 kills, Burns had 7.

In junior high basketball, MBCS took the early lead jumping out 16-0 in the first quarter and leading 30-2 at the half. The final score found MBCS on top 36-17. Andrew Reed had the high points for the night with 9, led by Caleb Hopson with 7.

The Maranatha Eagles met the Victory Christian Conquerors in a home non-conference matchup on Tuesday evening.

In junior high play, the Eagles won 49-20 in regular play. Andrew Reed was the top scorer shooting 83% for 13 points. He was followed by Jack Bishop with 11 points, and Braxton Griffin with 10. Griffin and Reed were also 100% from the three-point line. Andrew Reed led the team in rebounds with 9.

The junior high Eagles improve to 3-0 on the year and are at home Friday night against conference rival, Jacksonville Christian Academy.

In senior high play, the Eagles put up a 56-30 win. Landon Griffin was the top scorer with 18 points, while Caleb Hopson, Andrew Reed, Dolton Weido, and Jack Bishop all shot 100% in their attempts for the night. Griffin also racked up 10 rebounds.

The senior high Eagles are 4-0 overall, and 1-0 in conference play. They play again on Nov 19 at home against Ambassador Baptist Academy.

The junior high volleyball Eagles began the night winning in two sets, 25-17, 25-10. Jessica Hopson led the team with 18 serves, 12 aces; while Arlington Weido had 14 serves with 6 aces. Carley Gilkey led the team in kills with three.

Both volleyball teams play again at home on November 12.

The senior high basketball Eagles posted a 44-31 victory. Roman Mullinax put up 16 points, shooting 100% from both the three-point line (4 for 4) and in free throws. He was followed by Caleb Hopson with 7 points.

The senior boys improve to 4-0 on the season, 1-0 in conference play. Their next matchup is Nov 9 against Victory Christian at home.

The junior and senior high Eagles traveled to Camden on Tuesday to take on Victory Christian School.

In senior high play, the Eagles won 70-25. Four Eagles scored in double digits with Dolton Weido bringing in 17, Landon Griffin with 14, Braxton Griffin with 12, and Jack Bishop with 10.

The junior and senior high Eagles both advanced to 3-0 this season, with conference play beginning on Friday. 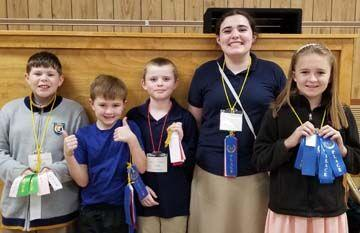 The convention is affiliated with Accelerated Christian Education and was for students aged 9-12. During the junior convention, students were given the opportunity to select from over 100 events to enter for competition with students throughout the region.

Awards are given to the top six finishers in each event. Maranatha Baptist students who received awards this year are as follows: